Kitten was spending her weekend decorating. The other half had been talking about it, and while he was at work, she decided to surprise him, a beautiful feature wall in the kitchen, then….oops, matte black paint splatters and spills all over the stone kitchen floor. Dammit, perhaps drinking wine while decorating was not just a great idea. Maybe a bold declaration of her love would detract from the mess, and the impending telling off she was going to get. 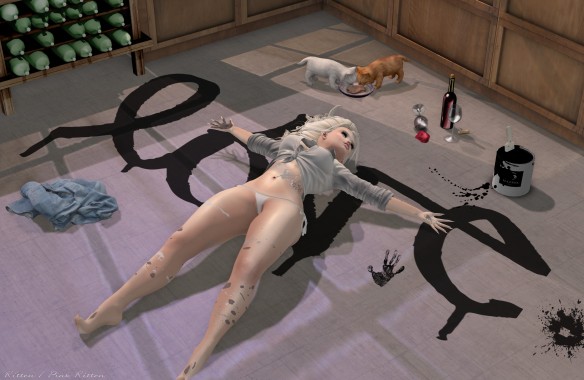 NEW Pose ::Hazeel:: Express Love bento pose – includes paint can, painted LOVE on the wall with pose inside the it, pose animation, poseball. I have edited the props and used the wall as a floor and moved the paint can to match. ***Please see the marketplace link for the scene as it comes***  NB ♥

Cats JIAN Pudgy Persians gacha – Grubbin’ Kitten – white and orange – seperate kittens, both are animated with their own bowls, however you can hie the bowl through the menu

Have a great weekend kitties